The Martini Henry Rifle was the standard issue weapon for the British army from 1871 until 1889. It was produced at the Royal Small Arms Manufactory at Enfield and it was named after Friedrich von Martini, a Swiss engineer and Alexander Henry, a Scottish gunsmith. This rifle was used by the British in the Second Afghan War, The Zulu Wars and the Boer War.

The Martini Henry was a breech loading rifle, unlike previous rifles which were muzzle loading; this means that the bullet was put into the beginning of the gun barrel rather than the end. A breech loader can be loaded and fired much more quickly than a muzzle loader. A soldier with a Martini Henry could fire 20 shots a minute.

The under lever was pulled towards the trigger to open a compartment in the breech so the bullet could be inserted, and then the lever was pushed back again. 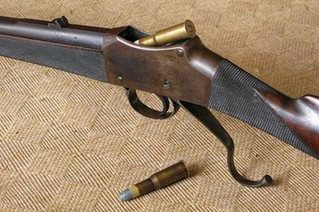 The bullet was properly known as a cartridge. It was 3.12 inches (79mm) long. The outside casing was made of brass. Inside was a lead pellet weighing 480 grains (31 grams) which was covered in white paper; and 85 grains (5.5 grams) of gunpowder. Between the gunpowder and the lead was a piece of board then a slug of beeswax then another piece of board. This beeswax acted as a lubricant when the bullet was fired. At the base of the cartridge was a cap of primer, a substance which explodes easily. The diameter of the cartridge was .45 inches (11.6mm) so the Martini Henry is referred to as a .45 calibre rifle. 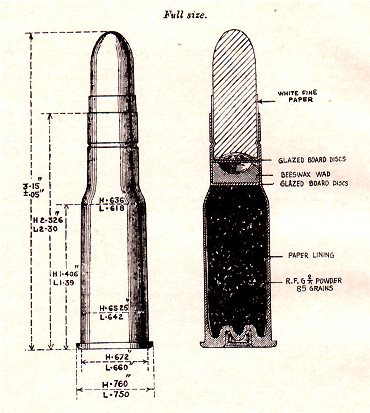 The cartridges were kept wrapped up in paper packets of 10 and carried in wooden ammunition boxes. The soldier had to reload after every shot.