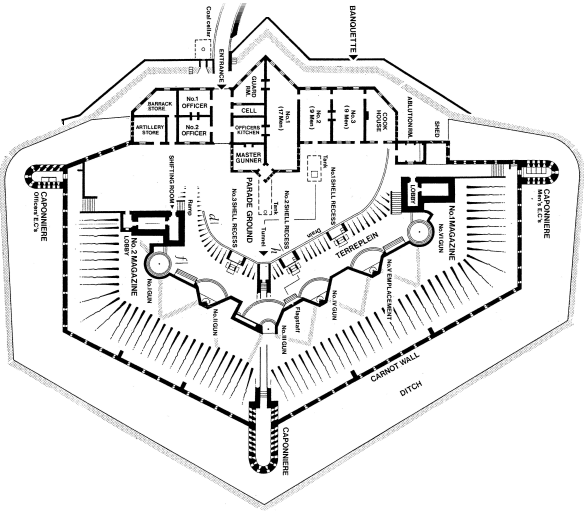 Please click the buttons below to learn more about the various parts that make up the Fort.

Please click the buttons above to learn more about the various parts that make up the Fort. You can also click on various parts of the map.

The barracks were built as quarters for the men and for stores, as you can see from the plan above the barrack building was split into12 rooms and an entrance. 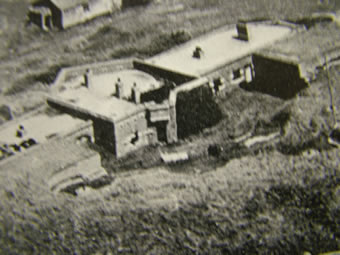 The entrance was the only way into the fort, with a guard room to the right, Next to this was a cell. Behind the cell, working towards the parade ground, was the officers kitchen and then the room for the Master Gunner.

The cook house was at the east end of the barracks, which contained a large range cooker. Then working west you have rooms for the men:-

At the west end was a small artillery store and barrack stores. Next to these were the rooms for the officers.

Throughout time the barracks had been modified until being demolished in 1959.

The Friends of Shoreham Fort are now in the process of excavating and recording the foundations of the barrack block, so why not come along and give a hand.

The Caponiers are sited on south, east and west of the fort, giving the men inside a full view along the Carnot wall and ditch.

Each of the windows or rifle slits are where the men would stand, making almost impossible for the persons attacking to get a clear shot, but giving the soldiers defending a wide range of views. 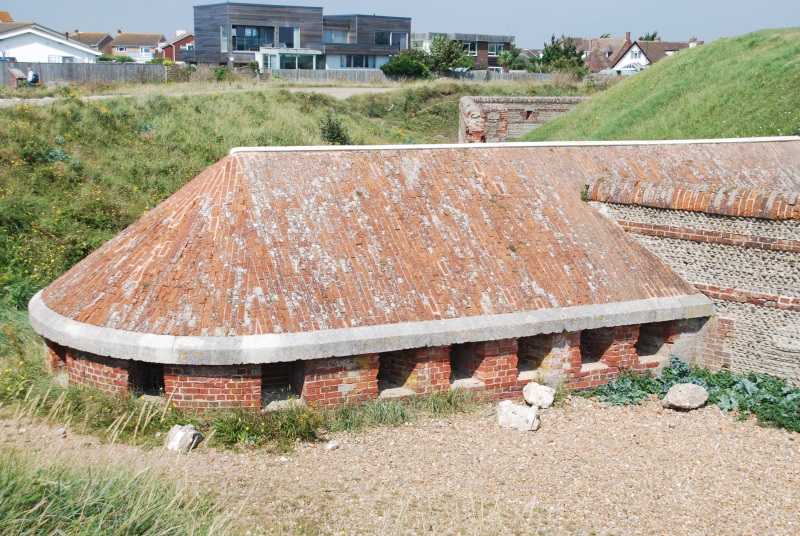 The reason that Shoreham Has Caponiers in replacement to bastions, was due to the theory that, if cannon fire hit the shingle on the beach in front of the fort, it would then ricochet the pebbles into the bastions then hitting the men.

Caponiers with there roofed design would prevent this.

Both the east and west Caponiers had another purpose, they were the water closets (toilets) for the men.

The West Caponier being for the officers and the east for the other men. If you look closely inside the East Caponier you can still see where the slate dividers once were, giving the soldiers a little more privacy from the other men.

The South Caponier and tunnel have recently been excavated by the Friends of Shoreham Fort and you can have a look for yourself on one of their free tours.

The Carnot wall is what makes this fort so special, it is now the last fort, as far as I know, in the country and maybe the world that has a Carnot wall incorporated in its design. 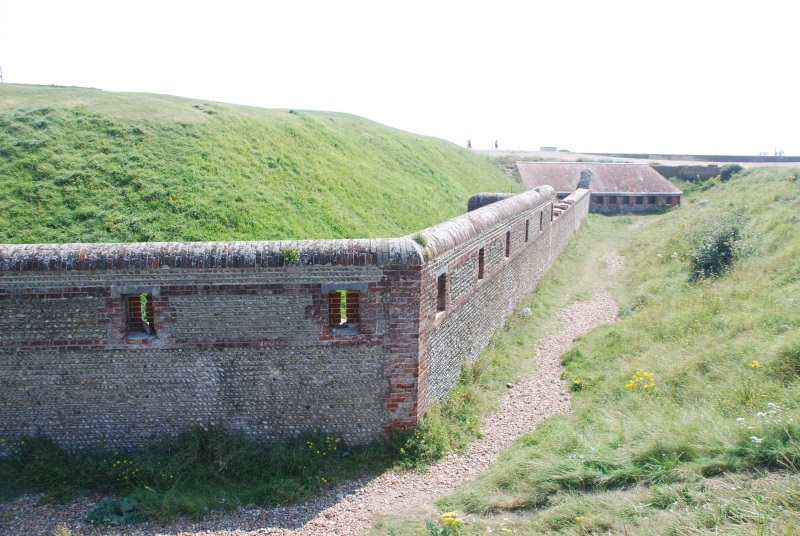 At its original height it would have stood 12 feet tall and allowed the soldiers to stand behind the wall and aim their rifles through the rifle slits at the enemy coming down the outside wall, whilst being protected from enemy fire.

The wall also had a rounded top, making it very difficult for the enemy to grip, if they got close enough to try and climb over it.

The wall is not visible from the sea, so would have been a very unwelcoming feature to the enemy attacking from the beach.

The volunteers are working very hard to now dig the ditch to its original depth so come along and see the progress. 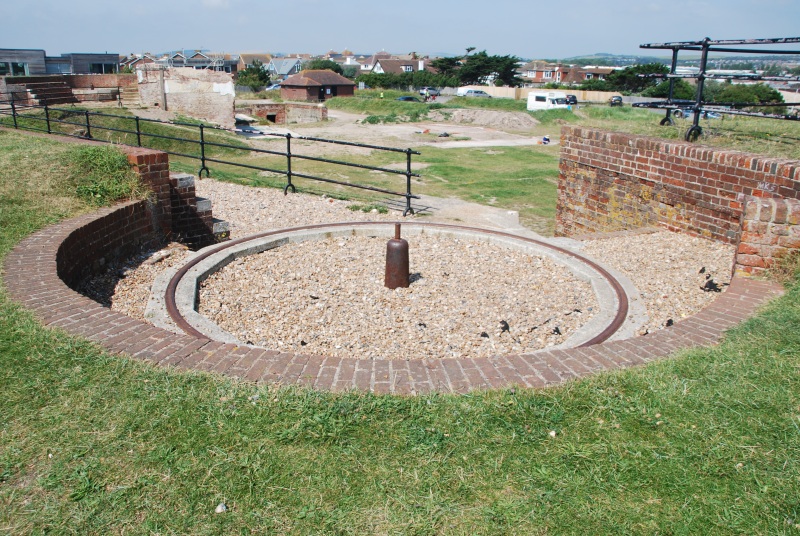 Gun emplacements were built for the guns to traverse on, they also would have played a part in protecting the gun and crew, with big earth mounds built on each side.

On the rails and pivots would have stood the large oak gun carriages that would have been pulled into position by the men using block and tackle and the iron loops that were built into the gun emplacement. It would have taken 7-8 men to crew each gun due to the size and weight.

At Littlehampton Fort they had five gun emplacements which proved to be slow and inadequate. Shoreham Fort had six; this in turn doubled the rate of fire produced. To find out how, why not join us on one of our tours. 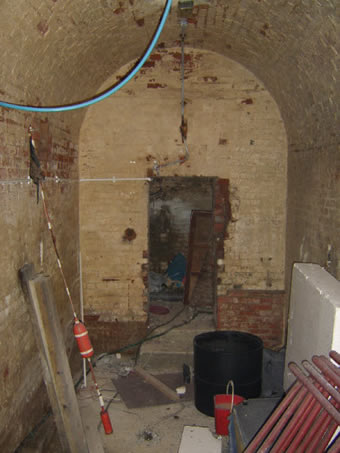 The magazines were built at either end of the fort to store the gunpowder and shells for the guns before they were moved closer to the guns and stored in the shell recesses.

The magazines were made in chambers, with a arched roof to give them strength. Above these chambers, earth was built up to a thickness of over 5 feet to absorb any direct hit from enemy cannon.

Health and safety modifications were brought in at Shoreham fort to prevent a mass explosion, visit our magazine and its experimental lobby. 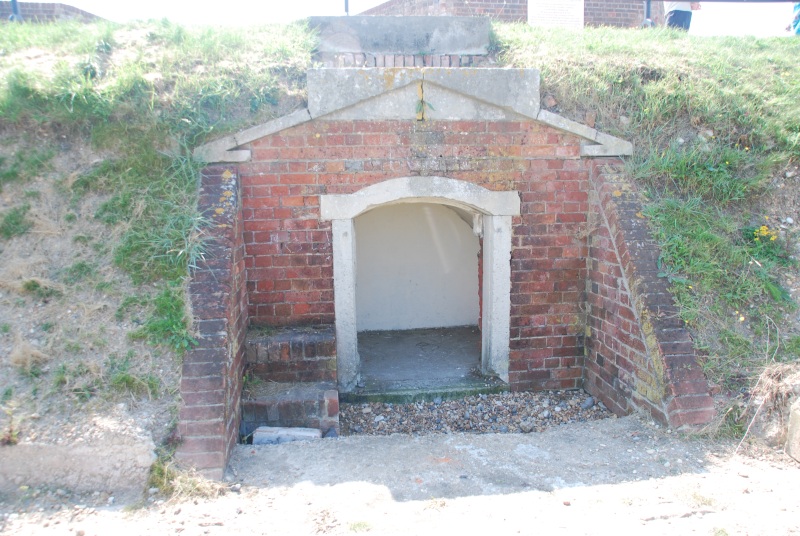 Shell Recesses were a new development as part of the prototype fortification.

They were used as temporary storage for the shells and gun powder, to hold them closer to the guns to allow quicker reloading of the cannons without having to walk to the magazines. Shoreham has 3 magazines shared between its 6 guns.

The person in charge of the Shell recesses was a Powder Monkey, for your chance to have a go at being a Powder Monkey come and find us on one of our volunteer/open days or events.