Of the many small forts and gun batteries built along the coast of Southern England during the past few centuries only two survive in anything like their original form. Littlehampton Fort, completed in September 1854, is now largely covered by the sand dunes and unfortunately less complete and Shoreham Fort, also known as Kingston or Shoreham Redoubt, completed in June 1857. Both of these forts are in West Sussex. 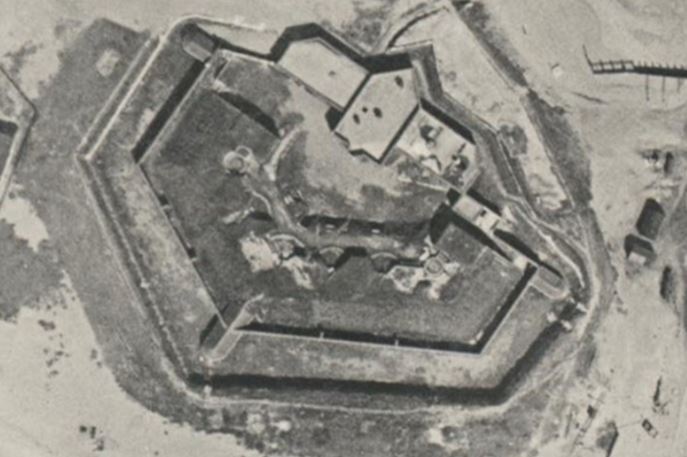 These two forts are important examples of experimental fortification, using what is known as a Carnot Wall. They were built directly after the introduction of the ‘rifled’ gun barrels on the continent. Rifled barrels were an invention of the mid-nineteenth century with the aim of increasing the range and accuracy of heavy guns. The design flaws from building Littlehampton Fort were corrected at Shoreham Fort before going on to build the more elaborate fortifications in Portsmouth, one of which is our Royal Armouries museum, Fort Nelson.

After several centuries of the harbour at Shoreham being classed as insignificant it increased in importance as that of the neighbouring Sussex ports declined. The defenceless state of Shoreham harbour was of small concern until well into the nineteenth century and there were several reasons for this: 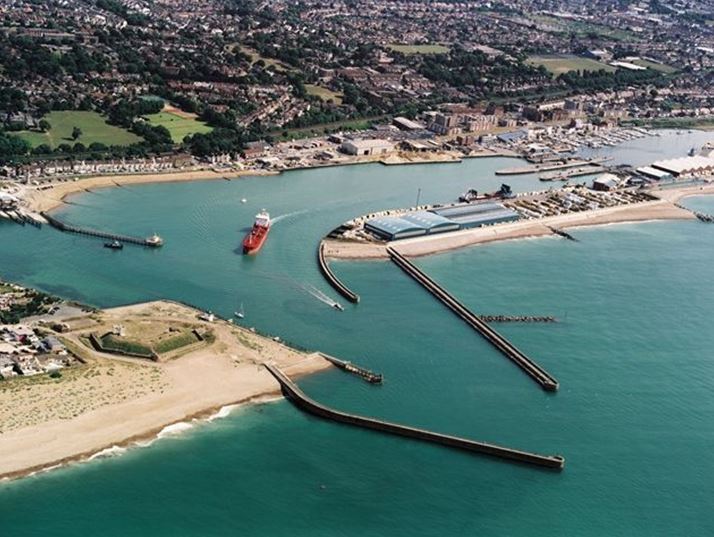 One good example of why there should have been defences and why, probably, the fort was built is confirmed by an incident in 1628. Some French ships navigated their way into Shoreham harbour. Whilst in the harbour they managed to capture a small craft and without any sort of defence at the time the attack caused great alarm and commotion. Men were dispatched to Brighton to fetch ordinance, fearful of any further raids. It seems there was, at the time, no artillery nearer than Brighton which goes a long way to prove the need and reasoning for building the fort. It also explains why the south coast was defended so well; having forts and gun batteries built at regular intervals.

During tensions in the Napoleonic period, new batteries were built at Bognor, Selsey, Littlehampton and other previously unfortified places. Shoreham was left defenceless though and no special preparations were thought necessary although in 1801 five hundred troops were deployed to defend or even destroy, if required, the Adur Bridge which was then situated much further up river near the Sussex Pad Inn.

In 1816 the wandering exit of the river Adur was finally stabilised between two piers in the same positions they are today. This then helped increase the trade and commercial use of the harbour.

In the 1850’s, when French intentions caused apprehension, it was then decided to man and defend the harbour mouth with a permanent fort. The newly constructed harbour entrance, as it was then, was selected as the site for Shoreham Fort – just on the wide shingle spit immediately to the west. This was so that the guns could defend and command the harbour entrance, its approaches and the beach.

Work began on the fort early in the year of 1857 and by the June of the same year the fort was completed. Details of cost, armament and accommodation are given in a detailed survey of Shoreham Fort, drawn from some old plans and measurements by W. Mumford of The Royal Engineers, on the 1st September 1886. The estimated cost was £10,000 and the actual cost was £11,685.10s.0d. This was more than the fort at Littlehampton but it was slightly bigger as it was built to include six guns instead of five and the ditch defences were more elaborate. An anonymous note in Brighton reference library (Box 24) gives the builder Messrs. Smith of Woolwich but the source of this information is still unclear.

The emplacements stood about 15 ft (4.6m) above sea level, so the visibility over the harbour entrance and neighbouring beaches would be increased, increasing the defence of the fort. The underground magazines were each designed to take 126 barrels of gunpowder and the water tanks carried 11,578 gallons.

The fort was built to accommodate two Officers, one Master Gunner and 35 NCO’s and Privates all housed in the barracks.

The ground plan was in the shape of a lunette, or a rectangular half-moon, similar to the fort at Littlehampton, with earthen ramparts on which the guns were mounted and at the rear was a defensible barrack block. The fort was surrounded at the front and sides by a ditch which carried a Carnot wall along the bottom, this wall would have been about 12 ft (3.7m) high. Shoreham is the earliest example of a fort with a Carnot wall still reasonably intact in the UK. 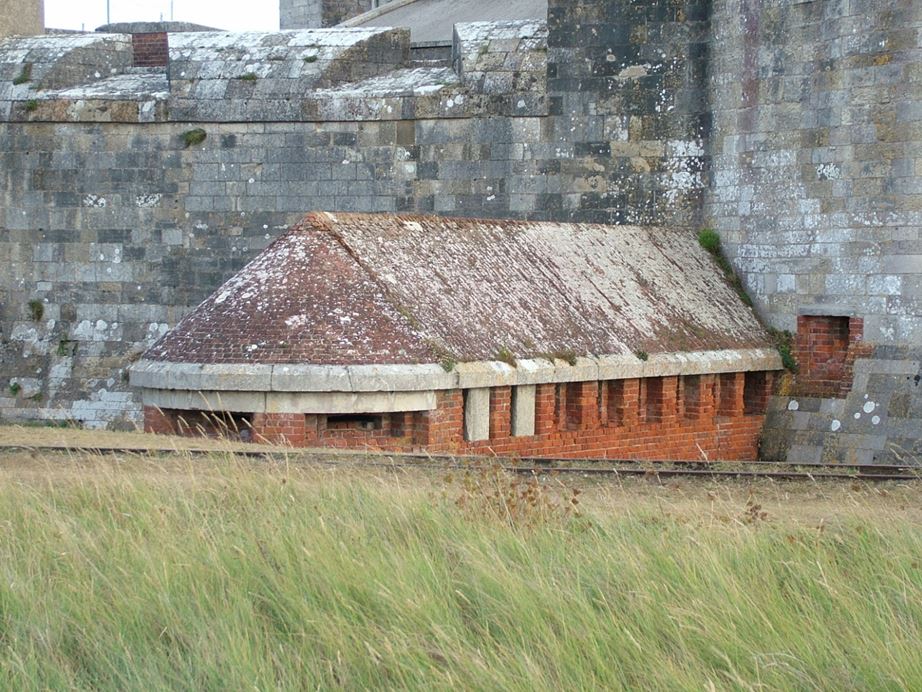 At the three corners are the covered bastions, or Caponiers/Caponierres, which can be entered from the inside of the fort, allowing defenders to fire along the outside of the Carnot wall whilst still being under cover. These represent a development from the open bastions built a few years earlier at Littlehampton, it was felt that if the men were defended by a roof, it would make an invasion impossible to succeed, as all men were then defended at all angles. It also protected them from cannon fodder hitting the beach in front of the fort sending shingle into the air like grape shot. The Caponiers were identical, all be it smaller, to that built to protect the main entrance to Hurst Castle, which is one of the huge granite casemate fortifications built to protect the needles entrance to Southampton Water. 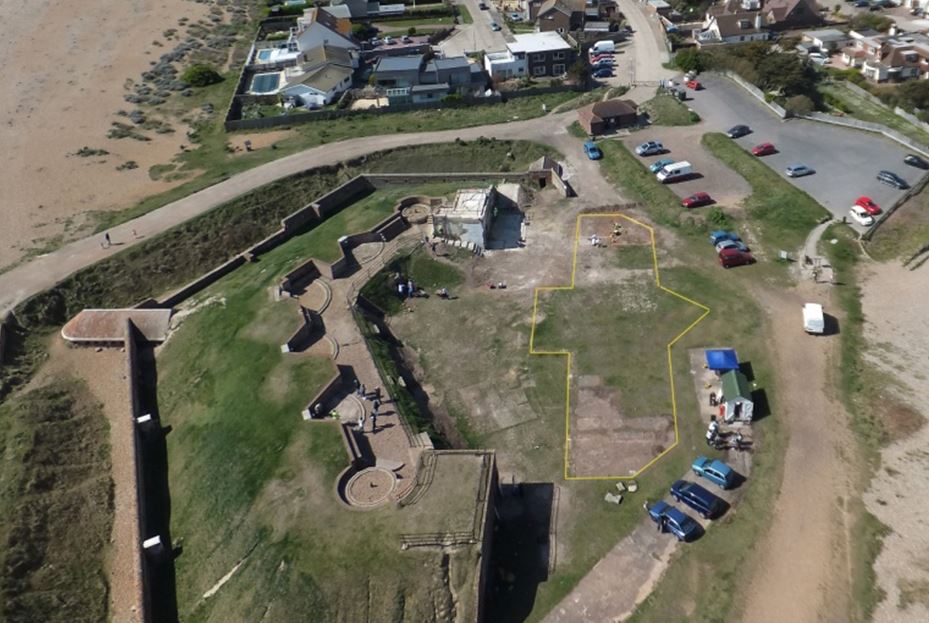 Buried beneath the two ends of the ramparts were the two magazines. These comprised stores and shifting rooms where the shells and cartridges were loaded. After being built, the western magazine was then modified to incorporate a third room. This third room was known as a lobby and was an area to change from your hobnail boots into leather slippers. We believe this modified room was added once it was realised that a single spark from the owners boots, could cause a powder explosion.

Piles of iron shot were placed by each gun and shell recesses or expense magazines, where small supplies of ammunition were maintained lay adjacent. There were no hoists and shells were carried to the guns by hand. A Powder Monkey, a young boy of about 16, making use of either the steps alongside and above the expense magazines or the ramp.

The guns, mounted on the gun platform or terreplein, fired over a low protective wall. The wooden gun carriage recoiled up an inclined plane on a traversing wooden platform carried on iron rails. Each gun was manned by at least seven men and was manoeuvred using wedges, levels and block and tackle. The gunnery officers or Master Gunner, could supervise operations from the steps placed between the gun emplacements. These steps were also used by infantry to fire their Rifles at enemy troops approaching on foot from the beach.

The barrack block accommodated officers and men and, with its rifle slits, formed part of the fort defences giving it a defended perimeter. A central area served as a parade ground and beneath this were two tanks which, if needed, could supply the fort with water in time of attack. The water tanks approximately carried 11,578 gallons of water.

Soon after the fort was completed it was proposed that the fort should be remodelled after criticism in parliament that Shoreham Fort alone would find it difficult to protect the harbour. This criticism seems to have been justified and lead to a new inquiry in about 1859 and three additional fortification expansion works were generously proposed.

Although this work never happened the fort was still manned by the volunteers until at least 1896, although the regiment were still in Shoreham until after 1906 and at least one cannon stayed until after 1918, so the fort was manned for a period of roughly 49 years and used for longer.

In the Second World War a battery of six-inch guns was erected on the fort, but these have since been removed and only part of the footings survive, It may have been at this stage, or even earlier, when the gun emplacements I, III and VI were modified by the lowering of the walls over which the guns fired. There was also an aiming light station constructed on the eastern side of the fort, which still survives today. Another was built a little further west, along the beach. The Barrack Block was variously used as a film studio and private dwelling before being demolished in 1958.