The Lewis Gun was a light machine gun which first came into service during the First World War and which continued to be used in the Second World War. Typically it was employed as an anti-aircraft gun.

The gun was invented in 1911 by an American named Colonel Isaac Newton Lewis, but the US government did not adopt it, so Lewis took his design to Europe where it was purchased by the Belgian and British governments. In Britain the gun was manufactured by the Birmingham Small Arms Company (BSA). The Lewis was formally adopted as the standard issue British Army machine gun from the close of 1915 and by 1916 approximately 50,000 had been produced in Birmingham. The Lewis gun was belatedly adopted by the U.S. Army in 1917, and then manufactured in New York.

The gun fired cartridges which were held in a circular drum magazine. This drum was mounted flat on top of the breech of the gun and held 47 rounds of .303″ ammunition. The drum revolved after each cartridge was fired, bringing a new cartridge into the gun chamber. 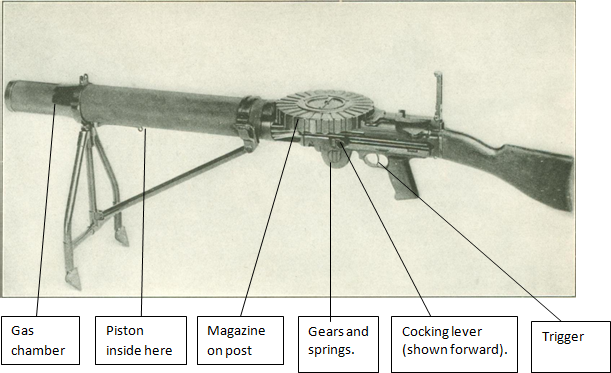 To fire the gun:

Place the loaded magazine onto the post on the breech of the gun and rotate it slightly until the hook on the magazine catches on the groove in the post. The magazine will then be held securely.

There is a cocking handle on the left side of the gun. Pulling this back as far as it will go will a place a cartridge into barrel of the gun. Then pull the trigger. A bolt will hit the bottom of the cartridge so driving it forward along the barrel where it will be struck by a firing pin. Then the powder inside the cartridge will explode and the bullet will be shot out down the gun barrel.

The gas from the explosion will leave the barrel by a vent and pass into a gas chamber. The pressure from the gas will force a piston down the length of the gun towards the trigger. The piston will then engage with a spring gear device which will cause the spent cartridge to be ejected and a new one to fall into the gun.

The gun was usually operated by soldiers in pairs – one to fire it and one to put on new magazines of cartridges. A full magazine weighed 4.5 lbs (2kg). Sometimes there would be two extra men present whose job it was to keep refilling the magazines. A good team could fire 500 rounds a minute. The Lewis gun was only capable of automatic fire. It could not fire single shot.

The gun was fairly big and heavy – it was 50.5 inches (1.28m) long and it weighed 28 pounds (13 kg). It could be fired by a man standing upright but usually it was usually steadied by resting it on a stand with the gunner lying prone on the ground. Sometimes the gun was fixed on a plane. 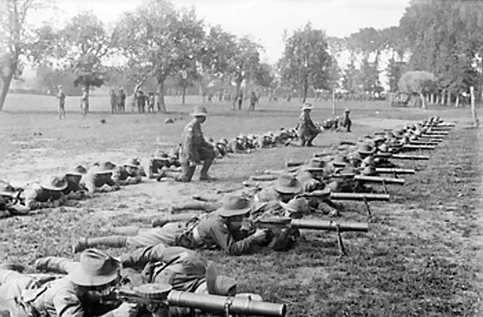