The formation of the Volunteer Movement dates back to 1859 when the English public became greatly exercised about the likelihood of an invasion of the south coast by the navy of Napoleon III of France. Those supporting the demand for a Volunteer Corps tended to be the middle classes, spearheaded by the Times newspaper, who did not trust either the army or the militia to protect their property. Strongly opposed to the idea of armed volunteers was the entire army establishment and the government. The army chiefs felt that volunteers would be untrained, undisciplined and incompetent.

Finally the government gave in. On 12th May 1859 the Secretary of State for War, General Jonathan Peel, issued a circular authorising the establishment of Volunteer Corps. The government had decided that such a move would be a popular vote winner without incurring any cost to the taxpayer or any threat to law and order, as the Volunteers would all be men of some financial and social standing. To ensure an element of control the Volunteers were put under the supervision of the Lords Lieutenants.

To Her Majesty’s Lieutenant for the county of._ _,

“Her Majesty’s Government having had under consideration the propriety of permitting the formation of volunteer rifle corps, under the provision of the Act of 44 George III, cap. 54L as well as of artillery corps and companies in maritime towns in which there may be forts and batteries, I have the honour to inform you that l shall be prepared to receive through you, and consider every proposal.

The principal and most important provisions of the Act are-

I have the honour to be, &c., your most obedient servant , J PEEL

Originally the pressure had been for a corps of volunteer riflemen, but very soon the government realised that use could be made of volunteer artillery men and in a circular of 25th May 1859 suggested that there could be volunteer artillery corps to man the batteries in coastal towns. Local men could learn “how to work a great gun mounted in their immediate neighbourhood”

By a circular of 24th March 1860 the War Office tried to impose organisation on the various volunteer units by grouping them together into administrative brigades. The 1st Brigade of the Sussex Artillery Volunteers was formed with its headquarters in Brighton on 8th June 1860. It was divided into four corps: 1st based at Brighton; 2nd at Fairlight (moved to Eastbourne in 1878); 3rd at Hailsham and 4th at Shoreham.

Over the years the government aimed to take the Volunteer movement under the control of the army to make it a less localised and more efficient operation. In 1872 jurisdiction over the volunteers was removed from the county lieutenants and placed under the Secretary of State for War. Under the Childers Reforms of 1881 the artillery volunteer corps were designated as volunteer battalions of the 11 divisions of Royal Artillery and the 1st Sussex was put in the Cinque Ports Division. In 1889 these 11 divisions were reduced to three and the 1st Sussex was then in the Eastern Division of the Royal Artillery.

The War Office was anxious to provide mobile artillery units to work alongside infantry brigades and so in 1888 Volunteer artillery ‘position batteries’ were set up, not based at a particular location but able to deploy where needed. This change caused some confusion in the organisation with a result that in 1892 all the Volunteer Corps had to re-number their companies. 1st Sussex Volunteer Artillery had one position battery and seven garrison companies. No 1 was a Position Battery, 2-6 were Garrison Companies which seem to have been based at Brighton, no 7 was at Lewes and the group based at Shoreham Fort was known as no.8 Garrison Company. 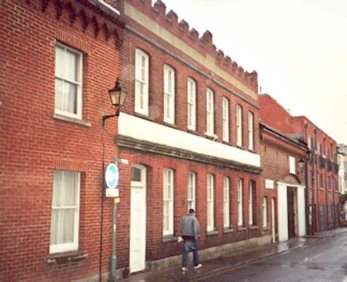 The headquarters of the 1st Sussex Volunteer Artillery in Gloucester Road Brighton (between Vine Street and Robert Street). It has been converted into residential apartments.

In 1894 the Lieutenant Colonel of the 1st Sussex Artillery Volunteers was Sir Charles Gervaise Boxall (1851–1914). In his working life he was a solicitor, (his law firm ‘Boxall and Boxall’ had offices at 22 Chancery Lane, London WC2,) but he devoted most of his spare time to the Volunteer Movement. He joined the 1st Sussex as a 2nd Lieutenant in 1873 and rose to become Lieutenant-Colonel in 1893 and Honorary Colonel in 1896. His long service in the volunteer movement was recognized by the award of the volunteer decoration in 1894 and his creation as a CB in 1897.

Although Boxall lived in Maidenhead he had a long association with Brighton. He came from a wealthy Sussex landowning and was born in the village of Ringmer and educated at Brighton College. His father was the developer of Percival Terrace, Brighton and his brother, William, was a member of Sussex County Council and Recorder of Rye. 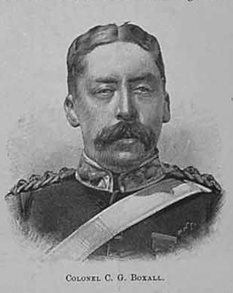 The Honorary Colonel of the Corps was Sir Julian Goldsmid MP (1838-1896). In 1878 Goldsmid succeeded his uncle, Sir Francis Goldsmid, Q.C., M.P., in the family honours and estates in Sussex, Kent, Berks, and elsewhere. He filled many offices, among them that of deputy lieutenant for Kent, Sussex, and Berkshire; magistrate for Kent, Sussex, and London; a member of the council of University College Hospital; and vice-chancellor of the University of London. He was the Liberal Party MP for St. Pancras South and in 1894 was Deputy Speaker of the House of Commons. He was colonel of the 1st Sussex Rifle Volunteer as well as honorary colonel of the 1st Sussex Artillery Volunteers. His business interests included being chairman of the Submarine Telegraph Company, and of the Imperial and Continental Gas Association, and crucially he was a director of the London, Brighton, and South Coast Railway. 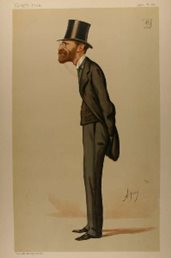 This Muster Roll was drawn in 1894 and shows the names of each soldier in the 1st Sussex Artillery Volunteers.

Is one of your relatives listed? Or perhaps a name that you recognise? Please do let us know 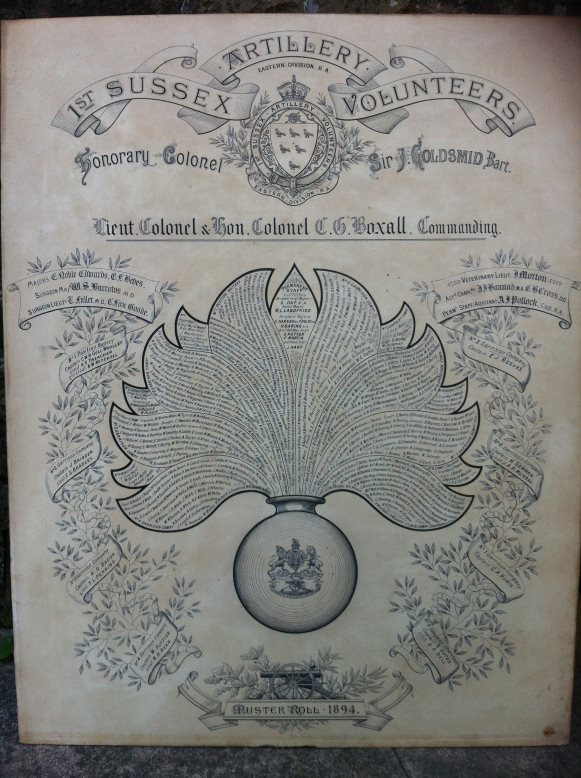